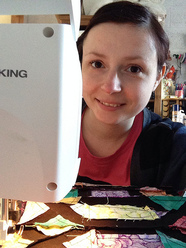 PennyDog is Kerry Foster, who lives and works in Southern Alberta, Canada and is originally from the UK. She has always loved crafts and is an avid quilter with a sketchy drawing style. Animals provide a constant source of inspiration. Her first dog was an old greyhound called Penny, which is where the name originates.

She has been a contributor to several publications in the UK including Crafts Beautiful, Make Jewellery, Beads and Beyond, Bead, Popular Patchwork, Quilt Now and Sewing World, plus Quilty in the US. She is working on her first solo publication, out August 2018.

Her educational background includes a degree in Publishing and a couple of Photography and English qualifications. Her interest in illustration came a little time after this. One of the things she misses most is developing her own photographs in a darkroom, so has to find some solace in modern digital editing as an alternative. Cartoonist Reg Smythe was her great uncle and she showed interest in his Andy Capp ink drawings and cosy drawing space at a very early age. ​